Visitors to the Cape Breton Women's Gallery realize there are women in their own lives who help make their life the way that it is. 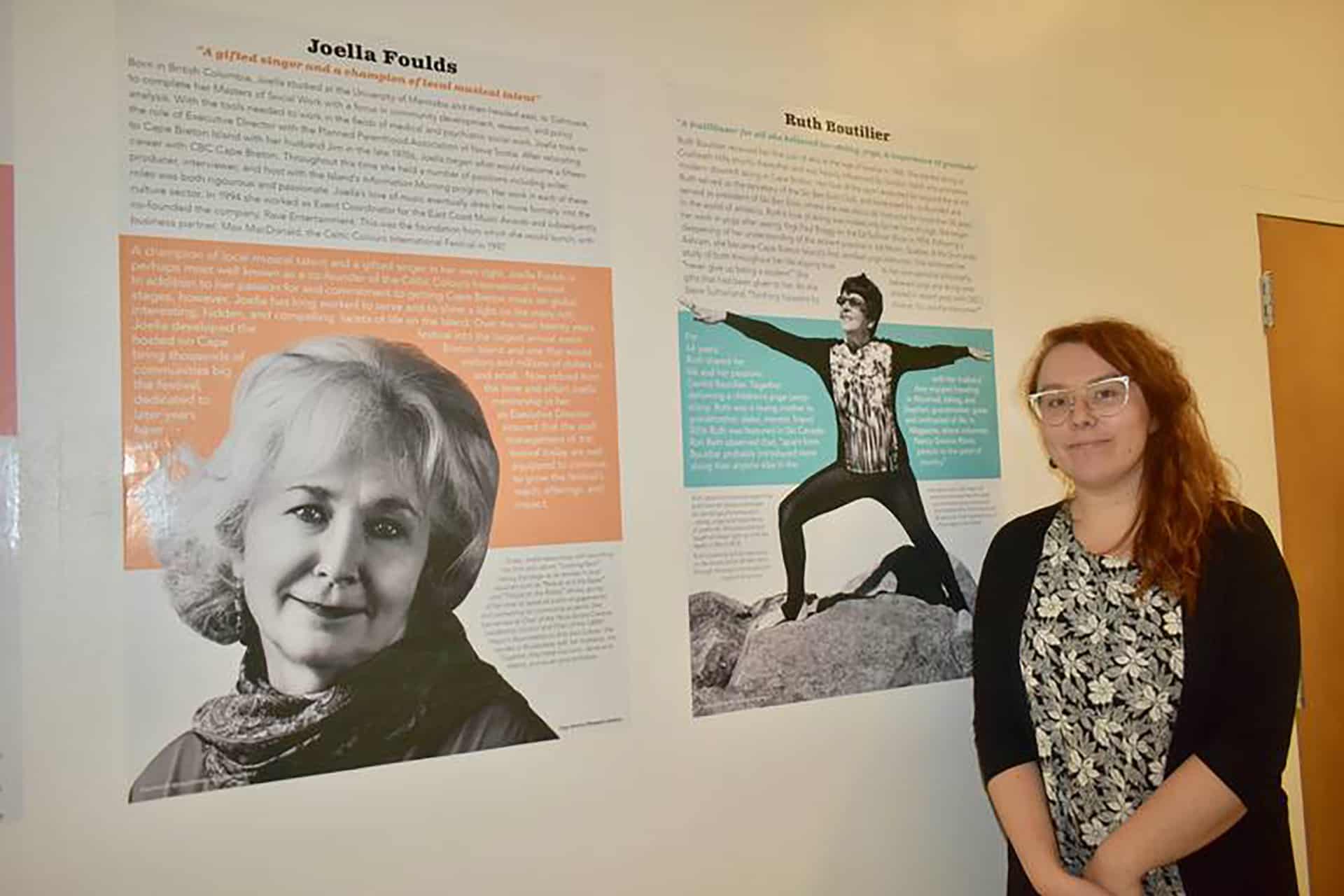 When Savannah Anderson leaves her office in the New Dawn Centre for Social Innovation to head into the building’s lobby, she’s never surprised to see people spending time in the Cape Breton Women’s Gallery.

“Every time I walk through the lobby there’s at least one person standing around,” says Anderson, referring to the large panels designed by Saba Mohsin featuring facts and photos of influential but not necessarily well-known Cape Breton women.

“Not everybody knows who all of them are but whenever someone comes into this building I know they stop to look and they go, ‘I know who Carol was’ or ‘Sister Rita Clare was one of my teachers.’ So they stand there and they learn a little bit more about women who might not have touched their lives but it helps them realize there are women in their own lives who help make their life the way that it is.”

At this time, the gallery is located outside and to the left of the building’s former auditorium. Seven panels outlining the lives of seven outstanding Cape Breton women line the walls, four nominated from 2017 and three from 2018. By the time the next panels are chosen, designed and ready, the entire exhibit will be shown in its own gallery in the newly renovated convent building when it is finished in October. The newest inductees will be named in November.

“The space we have there is a relatively large-sized space but if we want to be able to induct women into the physical gallery each year going forward, we have to limit down how many each year so that we can increase the longevity of the gallery, so going forward it will be two a year that will be inducted,” says Anderson, a communications assistant and co-ordinator with New Dawn’s Centre for Social Innovation.

While it’s not known who will be chosen this year, previous inductees are probably known by most. In 2017, the inductees included Alice MacCormack (mother), Sister Rita Clare CND (music teacher and choral leader), Ethel Miller (singer) and Carol Kennedy (photographer). In 2018, the inductees included Eileen Swift Cook (credit union manager), Joella Foulds (co-developer of the Celtic Colours International Festival) and Ruth Boutilier (ski and yoga instructor). Anderson says it’s surprising what she’s learned about these women and their accomplishments.

“Eileen Swift Cook was the first woman to manage a financial institution in Nova Scotia — she managed the Steel Centre Credit Union for about 37 years which is now the Cape Breton branch of the credit union,” says Anderson. “Most folks know Joella as the co-founder of the Celtic Colours Music Festival but a lot don’t know is that she has a background in social work and she was actually the executive director of Planned Parenthood of Nova Scotia for quite a few years even before she went to CBC as a radio host. Ruth Boutilier was a pioneer in Cape Breton — she taught a lot of people how to ski and a lot of people yoga. She was the first yoga instructor on the island. And she was always a great spirit and inspired people to be physically active. The selection committee thought that these women were very exemplary of women we should be celebrating in the area.”

If there’s someone you feel should be nominated, Anderson encourages people to do so when the call for nominations goes out later this year.

“To have one of your loved one nominated for this gallery, we will be opening the call probably late spring or early summer 2019,” says Anderson, adding the process information will be shared through social media platforms including the New Dawn Facebook page which includes a Cape Breton Women’s Gallery page.